September 20, 2021
I'm a fan of Martina Evans, and this latest collection gives many different pleasures. The shorter lyrics offer a wealth of local and personal detail that seduce a reader with the childhood world of Cork and the adult one of London. Even when she is writing about her job in radiography, she is not so much writing about the work as the people: their fears, their waywardness, their idiosyncracies. The poetic sequences, whether they are about shoes or cats, offer the delights of variations on a theme. The long narrative "Mountainy Men" is yet another triumph of narrative skill. It reminds me of Flannery O'Connor, not her religious intensity, but her deep ambivalence towards Gothic grotesquerie. Evans is enraptured not by transcendence, but by the here and now, the there and then.
Post a Comment
Read more

September 17, 2021
Weekly column written for the Singapore Unbound newsletter. Sign up here . Singapore will soon take another step towards becoming a totalitarian state with the introduction of the Foreign Interference (Countermeasures) Bill, or FICA, in Parliament last Monday. Independent Singaporean journalist Kirsten Han analyzes the problems with the bill effectively here . As she summarizes, "The official narrative is that this law will protect Singapore from foreign meddling in our domestic affairs and governance. We’re told that it’s about safeguarding our political sovereignty. FICA, like the Protection from Online Falsehoods and Manipulation Act (POFMA), will take on hostile information campaigns, so that Singaporeans can decide on Singaporean issues without the sneaky intervention or sabotage of outsiders. The reality, though, is that FICA is yet another vaguely worded piece of legislation, designed to give the authorities maximum discretion to cast a wide net over all so
Post a Comment
Read more

September 10, 2021
Weekly column written for the Singapore Unbound newsletter. Sign up here . Dale Peck, the author of Hatchet Jobs , strikes again. And again. At the gay Republican journo and pundit Andrew Sullivan, whose self-hating screeds supporting the traditional family, compassionate conservatism, and other such mythical beasts deserve buckets of vitriol but receives at Peck's hand the scalpel of savage, and very funny, wit. Here's how the review of Sullivan's Out on a Limb: Selected Writing 1989–2021 (Simon & Schuster) begins: "Andrew Sullivan first showed up on my radar in 1991, an innocuous blip that gave no indication of the full-frontal assault about to be launched on the American left. I was working for OutWeek at the time, and I’d been tasked with proofing an interview between a seraphically beautiful young journalist named Maer Roshan and the recently appointed editor in chief of The New Republic (who, if I’m being completely honest, wasn’t so bad-looking
Post a Comment
Read more

No Country for Women

August 20, 2021
Weekly column written for the Singapore Unbound newsletter. Sign up here . The situation of women in this country in the news is horrific. Women are subjected regularly to physical terror, not just on the streets but also in their own homes. 1 in 3 women have experienced some form of physical violence by their intimate partner, and 1 in 7 of women have been injured by that abuse. 1 in 2 female murder victims are killed by their intimate partners, often with a gun. The threat of sexual assault is real and constant. In the course of their lives, 1 in 5 women have been raped. From 2016 through 2018, the number of rape/sexual assault victims increased 146%. Women are prevented from full and equal participation in the economy. Victims of intimate partner violence lose a total of 8,000,000 days of paid work each year, the equivalent of 32,000 full-time jobs. Between 21-60% of victims of intimate partner violence lose their jobs due to reasons stemming from the abuse. When wome
Post a Comment
Read more

August 16, 2021
Read three novels during our one-week vacation in Maine. A very believable romance lies at the heart of Martha Cooley's new novel Buy Me Love , but in the depths lurks the tangled bond between brothers and sisters, and into the air rises an aria of love to Brooklyn. As for Alan Lightman's Reunion , the minor style cannot save a slight plot and slighter characters. Mikhail Bulgakov's The Master and Margarita is a literary masterpiece. The floating point of view is a tremendously flexible and exciting device. The imagination at full stretch, whether revising the crucifixion narrative, inventing the Devil's ball, or describing the feeling of flying just above Moscow. Simultaneously profound philosophical and ethical questions are posed, such as cowardice and compromise while living under a totalitarian regime.
Post a Comment
Read more

Entries for 1st Awards for the Best Undergrad Critical Essays 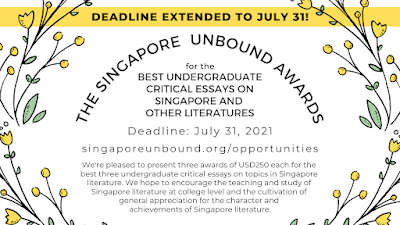 Singapore Unbound received a total of 9 entries for our 1st Awards for the Best Undergrad Critical Essays on Singapore and Other Literatures. All 9 essays focused on Singaporean texts; none took a comparative lit perspective. The Singaporean texts are diverse in periods, genres, and author backgrounds. The essays will now be read by Professor Koh Tai Ann, who will decide on three awards, each worth USD250. The awards will be announced in September 2021. The essay titles, listed below in no particular order, are so exciting in themselves: -Stateless Citizens: Apathy as Defence Mechanism in Amanda Lee Koe's MINISTRY OF MORAL PANIC -The Modern Malay Woman’s Reclaimed (Home)land: Syncretisation as a Strategy of Resistance in Singapore Theatre (Zizi Azah, Alfian Sa'at, Nabilah Said, Haresh Sharma) -Readerly Desire in PONTI: Beyond Eros, Eurocentrism, and Closure (Sharlene Teo) -“This is Home, Truly?”: A Cross-Generational Comparative Study of the Changing Attitudes t
Post a Comment
Read more 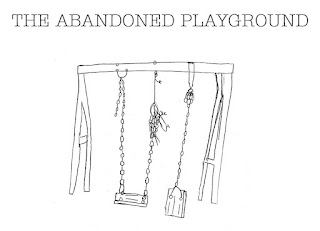 Three sonnets from "Ungovernable Bodies" have just gone live on the beautifully curated website The Abandoned Playground . The first two sonnets are written "after Yeow Kai Chai," whose work is always a challenge and an inspiration. Thanks, Daniele Pantano, for publishing them. It's a real honor to be included in your marvelous selection of writings and art. Everyone should check out the website.
Post a Comment
Read more
More posts