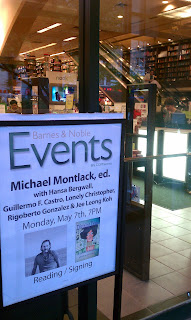 Last night, at the Barnes & Noble at 82nd and Broadway, Lou Pizzitola hosted a reading of Divining Divas, an anthology of 100 poems by 100 gay poets on their muse. Editor Michael Montlack spoke about putting together the book, and then he read from it, followed by Guillermo Filice Castro, Lonely Christopher, Hansa Bergwall and Rigoberto Gonzalez.

I read my anthology piece, "Study #5: After Frida Kahlo," and then two other parts from the same sequence, "Study #6: After Andy Warhol" and "Study #7: After Yasumasa Morimura." For my second poem from the anthology, I read Steve Fellner's funny and heartbreaking "Ode to Miss Piggy," a poem I remembered enjoying from his book The Weary World Rejoices.

Despite the grey day and drizzle before the reading, the event room was packed, with about 75 people, a nice mix of both men and women. After the reading, the audience asked questions, mostly to do with editing the anthology. Then we signed books, printing our paw prints on the page of our poems. Eric came for the reading. GH was there too, and took these photographs. 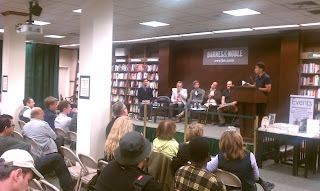 August 28, 2011
Ruth Pitter lived in the twentieth century (1897-1992), but her poetry lives in an earlier time. It refuses to acknowledge Matthew Arnold's "melancholy, long, withdrawing roar" of faith, but struggles in isolation with religious doubt and meaning. As such, it is, on occasion, a powerfully individual poetry, but it is also radically cut off from the most significant movements of her time. The refusal to engage with Modernism and its aftermath stunts the poetry. The slightly archaic diction and windy abstractions persist into the late poems. The use of traditional verse forms (including the heroic couplet) evinces individual skill but makes no larger argument, unlike the work of Eliot, Auden and Larkin. A few late poems grapple with modern science, but the main thematic development in the Collected Poems is from the observation of nature to the description of dreams-visions, a movement backwards in time, from Romanticism to medievalism.

The nature poems, from the start, ar…
Read more

A Haibun for Turning Forty

March 20, 2010
Wrote a new poem this morning, a haibun for Kimiko's workshop. It is at the end of this post. Checked my email and found a lovely fish ghazal written for me by AH. I am a Pisces. Other friends, like WL, CM and TH, had emailed me earlier their birthday wishes. Read the TLS before having a quick lunch at the local Chinese takeout. Started reading Christopher Ricks's True Friendship: Geoffrey Hill, Anthony Hecht and Robert Lowell Under the Sign of Eliot and Pound. This beautiful book, beautiful in writing and design, is a birthday gift from HS. She loves Anthony Hecht and knows I love Eliot. Both of us admire Ricks's criticism. Mum called to wish me happy birthday. Took a nap because I was out late last night. Checked my email and read that another group of my poems, the Boland-inspired pieces, have been accepted by MS for the PN Review. That made up a little for the disappointment of not appearing on the Lambda list of finalists. Then attended KM's first solo art show at…
Read more

I found one truly memorable poem in the collection, a sharp observation transformed by a peculiar sensibility, a formula advocated elsewhere in the book but rarely followed. Even in this instance, the poem would have been better served if the last line has been removed.

Up from the bronze, I saw
Water without a flaw
Rush to its rest in air,
Reach to its rest, and fall.

Bronze of the blackest shade,
An element man-made,
Shaping upright the bare
Clear gouts of water in air.

O, as with arm and hammer,
Still it is good to strive
To beat out the image whole,
To echo the shout and stammer
When full-gushed waters, alive,
Strike on the fountain's bowl
After the air of summer.