Showing posts from July, 2015
Show all

July 31, 2015
At the Plaza de Santa Cruz, I watched the Los Gallos (The Cocks) tablao flamenco last night. Great singers and guitarists. The male dancer was terrific, as was one of three female dancers. The oldest one, of course.


Loud as castanets
the dancer snaps her fingers—
fish, fowl, and flesh

Things about Madrid I Will Not Forget

So many sex workers. South of Gran Via, the women are mostly white, north they are mostly dark, or trans. A melon is called melón but a watermelon is called sandia. In the morning, when the day is fresh, I love running shirtless along Gran Via and all around Retiro Park.

Given the wrong drink and too shy to ask the muscle waiter to change it. Tinto de verano, con limón. In a plaza chanced upon one night, Chinese schoolchildren kicking around a football and speaking Spanish, of course. Which of them will be the next David Villa? Which the next Lorca? Who will come first? Woken up at 4 am by the cigarette-edged talk of kids outside the club opposite my apartment.

The dark pearl on the outside of razor clams. A cruise club called Organic, equipped with a cross, resting horizontally, and revolving, on one leg. Goya’s Black Paintings.

July 26, 2015
Leaves on the sidewalk
color of a Guinness bottle—
moon waxing overhead

July 24, 2015
Visited Segovia yesterday, just half an hour by train from Madrid. When the bus from the train station approached the old city, everyone was immediately struck by the grand Roman aqueduct running across the public square. The aqueduct also ran underground to the castle.

At the museum of contemporary arts, I saw the show of Esteban Vicente's works. Born in Turégano, Spain, he studied art in Madrid, remarking on his experience at the Academy: "It doesn't give you any ideas about anything. It gives you tools, and teaches you about materials. Academic training is safe. It prepares you to be against." He moved with his American wife to the USA a few months after the outbreak of the Spanish Civil War. One of the first generation of American Expressionists, he knew artists such as De Kooning, Pollock, and Rothko. His works in the Segovia museum were constantly evolving, but maintained a delicate sense of balance. I liked his drawings best: their austerity was sensual and sp…
Post a Comment
Read more

July 23, 2015
The men ascend
in this capital city
on a brace of horses

July 22, 2015
Had a dinner of grilled octopus and pickled pork skewers last night at Casa Patas before watching the flamenco show. Raquela Ortega the dancer was mesmerizing. She showed why duende could only manifest at a mature age, when the artist brought all her life and training to the performance of a moment. The male dancer Sergio Aranda was virtuosic in his technique but he looked too young to be dancing with Ortega. The three singers, Tomasa Gabriel, Jesule Utrera, Fernandez de Antonio, were very good, as was the guitarist, the very handsome Yeray Cortés.

July 21, 2015
tuna empanada
from the end of the world
known to the Romans

July 18, 2015
They're thinking aloud,
the old zuihitsu writers,
but where are they?

July 16, 2015
Found the lovely little garden in El Museo Nacional del Romanticismo yesterday. The high walls provided shade while the trees provided airy perches for birds. It had a small fountain with a Cupid in it.


In the evening, NT brought me to La Latina. I had razor clams, fried in olive oil and parsley, for the first time. It was the speciality of the restaurant called Bar Cruz, also billed as Las Casa de los Navajas. We walked to the ethnically diverse neighborhood of Lavapies, and ate again at Restaurante Baobab. The menu was African. We had couscous negro and curry goat. It went down well with tinto de verano con limon.

July 15, 2015
Yesterday's highlights both involved eating. Lunch at a local chorizo restaurant with James Womack​ and Terry Andrew Craven​. James is a poet, translator, and publisher, originally from Cambridge, UK, now based in Madrid. Terry moved from Leeds to work with Shakespeare and Company in Paris before taking over the cave of treasures called Desperate Literature​ Bookshop with his wife Charlotte four months ago. Wonderfully easy conversation. Among other things, we talked about how different cultures invite people home, or not. And the arms race of giving birthday presents to one's spouse. My sausage was delicious. The other highlight was dinner by myself at 11 pm. Out on a walk, I was enticed by the sight of so many people eating and drinking outdoors at that late hour to wander into Plaza Juan Pujol, where I sat and had a good risotto, washed down with chilled red wine. The restaurant was aptly named El Balcón de Malasaña. I perched on that balcony and watched the world enjoy the…
Post a Comment
Read more

July 14, 2015
After looking at Guernica, the crowd at my elbows, their tour guide in my ears, I am coming out against history painting. The magniloquence of terror. The demand for submission. Far more delightful is the magic of Joan Miró, whose rooster crows in a landscape with it in it.

July 13, 2015
This far south
the day becomes light later—
the wavy darkness of his hair 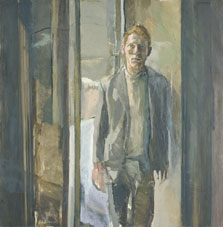 Yesterday's highlight was a visit to Museo Thyssen-Bornemisza. Was surprised to see a number of Lucian Freuds, including his Retrato of the Baron himself. Really liked Michael Andrews's "Portrait of Timothy Behrens," which shows the young man standing pensively at the entrance to the bathroom.

An unusual view of Saint Sebastian, tended by Saint Irene and her maid, attributed to Dirck Jaspersz. van Baburen:

Had lunch at La Cueva, with all male patrons, including construction workers from a nearby site. Used la lavadora successfully. Napped. Went for an walk at nine, when it was cool, and discovered the lively night life of Chueca and its surrounds. Lots of restaurants, outdoors and in. Sex workers plied their trade at street corners, a few transvestites. Men clustered in sociable groups along Calle Pelayo, the gay drag.

NT and his course mates were in the apartment when I returned. I joined in their discussion about the existence of god. Since it was past midnight, NT…
Post a Comment
Read more

July 10, 2015
Yesterday was my first full day in Madrid. Woke up at my usual time and worked on the Mothership interview. The gym on my street, Calle Valverde, opened at 9 am. A cute young gay guy was working out there when I arrived. Four other guys came in after me. The equipment was rather worn, but I managed to put in a good workout. Then I went for a run. I had walked around Chuecas on the day of my arrival in Madrid. Yesterday, I ran to the west of my street, and looked around Malasaña. The neighborhood, with its alternative shops and wall posters, reminded me of the Lower East Side. Like the LES, it was also gentrifying, art galleries and such.

I decided to walk to the Prado instead of taking the Metro. At the museum, I saw Titian's wonderful "A Knight of Malta with a Clock." Everywhere I was looking for portraits of men in their handsome prime, Caravaggio's young "David with the Head of Goliath" proving an exception. Velazquez was a star of the show. His "La…
Post a Comment
Read more

July 08, 2015
At Gatwick South Terminal waiting for my Norwegian Airlines plane to Madrid. Last night's reading at the London Review Bookshop must rank as one of the more memorable ones. Tickets were sold out and the bookshop packed with about 80 people. Michael Schmidt spoke about the net of PN Review/Carcanet that welcomes all schools of fish. The first to read, I had a slight sore throat and so paused a couple of times, but carried on like the National Service-trained soldier that I am. The most enjoyable moment for me was to refer briefly to the banning of Lee Tzu Pheng's poem "My Country and My People" from the airwaves because it was deemed insufficiently enthusiastic about nation-building. It was a pleasure to hear the four contributors to New Poetries VI, Rebecca Watts, Joey Connolly-Wright, Vahni Capildeo, and John Clegg. Get the anthology to hear the most exciting poetic voices now in the UK.

After the reading, I met Richard Price and enjoyed talking to him. Also spoke b…
Post a Comment
Read more

July 07, 2015
Had been eating too much. Had an enormous Polish dinner with MJ and DW last night. Went for a run in Kensington Gardens to work off all that food. I ran along the Serpentine, looping back to the Italian Gardens, at the head of The Long Water that becomes the Serpentine in Hyde Park. Then I went for breakfast at this little bakery I spotted yesterday at the end of Queensway Street, where I saw this morning a construction worker pass by.

Workman carrying an attachable barrier past a blonde

July 06, 2015
Saw the special Barbara Hepworth retrospective at Tate Britain yesterday. The exhibit showed her moving from early figurative works into abstract forms. The early abstractions explored single and double standing forms: self and relations. Both became interiorized, it seemed to me, in later abstractions that explored the relationship between her inner and outer worlds, in her response to the seascape of St. Ives, for instance. The later sculptures, often round in shape, were punctured or gorged with holes, as if to allow light (and eyes) in. At the same time, these holes functioned as framing devices, through which one could see the other side. One of the most powerful sculptures had a punctured ball sitting inside the puncture of another ball. It was also a fine example of her move late in her career into bronze, after working mostly with wood and marble.

Really enjoyed the show "New Brutalist Image 1949 - 1955: Hunstanton School and the Photography of Life and Art." The sho…
Post a Comment
Read more

July 05, 2015
Hurtling on the Virgin East Coast train from Edinburgh toward King's Cross, London. Last night's reading at The Sutton Gallery went well, I think. About 40 people packed the place. Colin Herd, the owner of the gallery, was a sweetheart. David and Eric were there. It was lovely meeting Henry King, my fellow contributor to New Poetries V.

I have known Rob A. Mackenzie, my host, on-line for about 15 years, first through an Internet poetry workshop, so it was a real pleasure to meet him in person, and to hear him read his work. The other readers Janette Ayachi and Tessa Berring were a terrific contrast in styles, and rendered their poetry very individually. Afterwards a group of us went to the Star Bar, and I got to know more of Rob's friends. Many interesting conversations, among which I picked up the factoid that Scotland exports its excess energy to England.

Rob and I walked back to his home in Leith. On the way, we passed through the pink triangle, the gay area in Edinburg…
Post a Comment
Read more
More posts